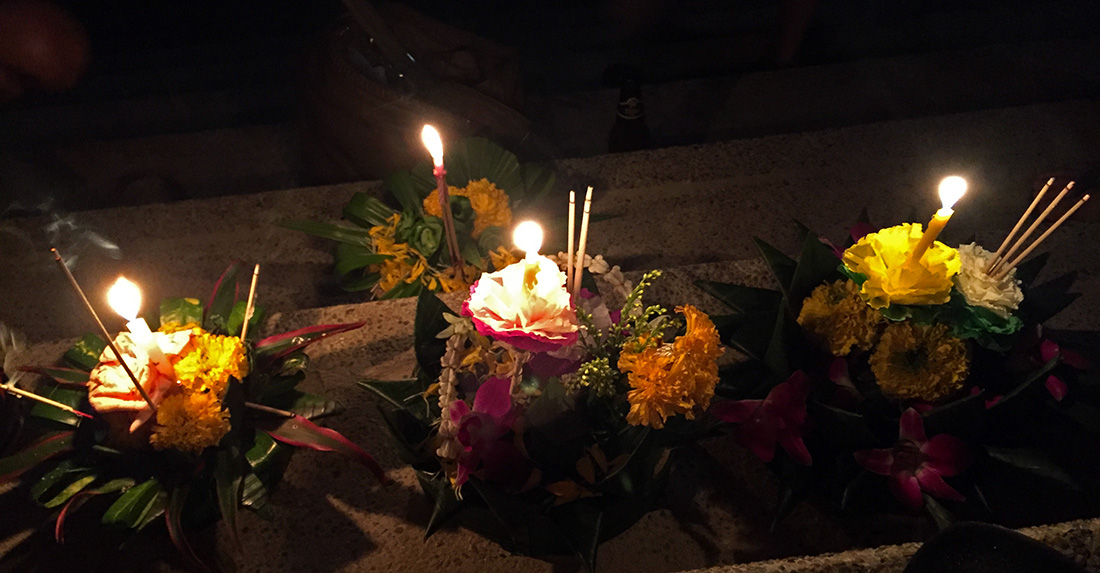 Hello everyone, Hannes and Lukas here again hope you all are fine.

This Wednesday we took part of something fantastic, we took part of the fantastic and famous Loi Krathong festival. The festival is about lighting candles and incense on beautiful small boats that is hand made with flowers and other beautiful, colorful plants on. Before you send them away in to the sea you put a hair straw from yourself, a coin and a toenail in the “boat”. Then you let the boat float out in to the sea and let it wash away together with your bad sins and bad thoughts.

The name Loy means “to float” and krathong is the name of “boat” therefor the name Loy krathong. The traditional krathong are made from a slice of the trunk of a banana tree or a spider lily plant. Modern krathongs are more often made of bread or Styrofoam. A bread krathong will disintegrate after a few days and can be eaten by fish, which is good.
How everything started:

Loi Krathong is often claimed to have begun in the Sukhothai by a lady named Nopphamat. However, it is now known that the Nopphamat tale comes from a poem written in the early Bangkok period. According to H.M. King Rama IV, writing in 1863, it was a Brahmanical festival that was adapted by buddhists in Thailand to honor Buddha. The candle venerates the Buddha with light, while the krathong's floating symbolizes letting go of all one's hatred, anger, and defilements. People sometime cut their fingernails or hair and place the clippings on the krathong as a symbol of letting go of negative thoughts. Many use the krathong to thank the Goddess of Water.