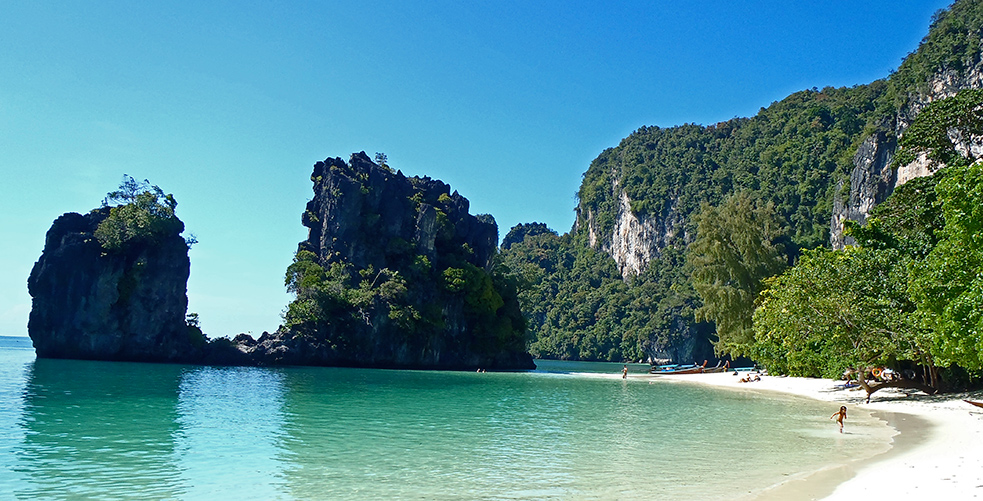 Hello there! A while ago we arranged something special for a German company.

They wanted to go on a private boat trip and they were 46 guests. So we arranged two speedboats for them and we guided them around some nice local places around here. It was kind of like the Krabi 5 pearls boat trip that I wrote about a few weeks ago. But this one was more specified of what they wanted to do. So we picked them up with the speedboats outside their hotel and on the trip they were provided with soft drinks, a bunch of different snacks, towels and all of them had matching dry-bags. While we were traveling with the speedboat I tried to sell them some Dri-Docks. It wasn't the easiest thing to do on a bumping speedboat. But they were actually really popular by the guests and a lot of them bought one. A Dri-Dock is a small waterproof bag for your phone, camera or tablet. It is see-through so you can use it to take pictures under water.

So we started off with some snorkeling from the boat. I didn't do the snorkeling because there were some of them who tried it for the first time. So I stayed on the boat and helped everyone in and out of the water and also helped them find a fitting mask and life wests. We also showed them Phra Nang Beach and Chicken Island, where we ate lunch. After that we went to Hong Island and spend some time at the beach and did a guided tour around the island. Some people also did snorkeling there and they also had the opportunity to do kayaking in the lagoon.

While about half of the guests were kayaking there was one guest that told us he saw a shark right by the beach. So all of us went there to check it out and it was a black tip reef shark who tried to catch a dead pufferfish who had inflated. When they inflate they blow up like a ball and that's what they do when they are feeling threatened and trying to defend themselves. It's not good for them do inflate, they can't do it to many times in their life and it takes them up to 8 hours to deflate. It was really cool though, to see a shark that close to the beach, and even if I have been diving and snorkeling a lot lately I have never seen a black tip before.

It was a long day who took longer than we expected but the guests were really satisfied with the trip. Nice company, who takes their employees on a trip to Thailand like that, would be awesome to have a job like that one day. Wouldn't it be cool to work for a company like this?